Already since 1828 oatmeal is eaten in the area of the Netherlands; as breakfast, when you were sick, as dessert or whenever you were hungry. At that time milk farmers were selling oatmeal porridge, which was based on their secret recipe. Still, oatmeal is a popular breakfast item in the Netherlands. It’s easy to make, cheap and has a lot of health benefits. This recipe is lovely on a cold morning because of all the warm spices. 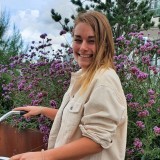